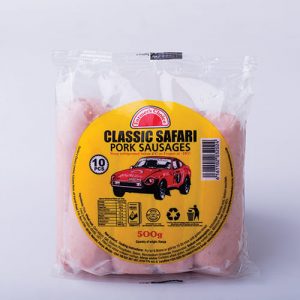 In 1994, the cut throat World Champion Safari was graced by our very own Ian Duncan who confirmed to race alongside 45 other drivers. This was great news for Kenya. It was then that Farmer’s Choice and Toyota Kenya joined hands to sponsor his campaign. Ian Duncan drove the Toyota Celica GT4 christened “Flying Sausage”.
He won the match, being his very first win his racing career and was honoured by Farmer’s Choice who introduced the “Safari Sausages” with the Toyota Celica GT4 vehicle branded on the package. Enjoy the signature taste of Safari sausages in honour of a great man.

Categories: Blog Posts
Share:
June 20, 2021
A good father is one of the most unsung, unpraised, unnoticed, and yet one of the most valuable
Read More
April 28, 2021
Are you a bacon lover? Do you know that a rasher can make a huge difference in your
Read More
March 8, 2021
Women working at every level matter and should be treated without bias. Over the years, women have made
Read More
March 8, 2021
Farmer’s Choice Limited has been offering employment in different fields ever since its genesis in 1980. We always
Read More
February 18, 2021
At 5 am, just as the day is dawning, Peter Mwangi turns off his alarm, jumps out of
Read More
December 4, 2020
Asumbi is a small village in Homa Bay County. At the heart of this village is a distraught
Read More
November 26, 2020
Farmers Choice Ltd. (FCL) partnered with Premier Food Industries Ltd (PFIL), Wire Products Ltd., and Allpack Industries Ltd
Read More
November 26, 2020
After the global COVID-19 pandemic broke out early this year, many businesses found themselves stranded in unfamiliar territory.
Read More
September 17, 2020
Across civilization and culture, encased meat has been a human staple. And while the origin of meat processing
Read More
September 17, 2020
We take joy in giving back to our society through various initiatives that will better the livelihoods of
Read More
Back to Top
We use cookies on our website to give you the most relevant experience by remembering your preferences and repeat visits. By clicking “Accept All”, you consent to the use of ALL the cookies. However, you may visit "Cookie Settings" to provide a controlled consent.
Cookie SettingsAccept All
Manage consent

This website uses cookies to improve your experience while you navigate through the website. Out of these, the cookies that are categorized as necessary are stored on your browser as they are essential for the working of basic functionalities of the website. We also use third-party cookies that help us analyze and understand how you use this website. These cookies will be stored in your browser only with your consent. You also have the option to opt-out of these cookies. But opting out of some of these cookies may affect your browsing experience.
Necessary Always Enabled
Necessary cookies are absolutely essential for the website to function properly. These cookies ensure basic functionalities and security features of the website, anonymously.
Functional
Functional cookies help to perform certain functionalities like sharing the content of the website on social media platforms, collect feedbacks, and other third-party features.
Performance
Performance cookies are used to understand and analyze the key performance indexes of the website which helps in delivering a better user experience for the visitors.
Analytics
Analytical cookies are used to understand how visitors interact with the website. These cookies help provide information on metrics the number of visitors, bounce rate, traffic source, etc.
Advertisement
Advertisement cookies are used to provide visitors with relevant ads and marketing campaigns. These cookies track visitors across websites and collect information to provide customized ads.
Others
Other uncategorized cookies are those that are being analyzed and have not been classified into a category as yet.
SAVE & ACCEPT